What is a private jet FBO?

You might have heard the term ‘FBO’ used to describe the separate private jet terminal at the airport. But what does FBO mean? And what should you expect from the FBO experience when you fly by private jet charter?

What is a FBO?

When a private jet customer comes to the airport, they don’t use the main airport facilities, shared with airline passengers. Instead they avoid the crowds and queues – and head instead for the FBO (which stands for Fixed Base Operator – see the origins of the term below).

The FBO is the private jet terminal at an airport. In many cases this is a purpose-built facility, set apart from the main airport buildings – and offering a range of services for private jet customers, aircraft and crew.

Sometimes the whole airport will be dedicated to business aviation (such as Farnborough in London, or Teterboro in New York). In other cases this is a small lounge within a general airport terminal.

What happens when you arrive at a FBO?

When you book a private jet flight, you will be given details of the FBO where you need to go when you arrive at the airport.

Some smaller airports will only have one FBO, but many will have two or more, so you may be given a choice of which to use. Some private jet customers will have a preference for a certain FBO and will specify this.

At the FBO you will usually be greeted by the reception staff at the desk and meet your captain. There will be a place to sit if you are waiting for other passengers, but in most cases private jet customers move through the FBO very quickly indeed – in just a few minutes.

Many customers are in and out again so quickly that they don’t see much of the FBO at all!

Customer facilities on offer in most FBOs include WiFi; light refreshments; and bathroom facilities.

Larger or more specialised FBOs also offer luxury concierge, conference and hotel rooms for customers who choose to spend more time there; and services for passengers travelling with families or pets.

Regardless of the size of the FBO, seamless and unobtrusive security and immigration checks will be made as required, in addition to the pre-clearance that has already taken place.

Then you will walk out to board your aircraft if is parked directly outside. Or you may have a short ride in a courtesy vehicle to the main airport ramp. At some airports, and for certain flights, passengers can even drive their own vehicle up to the aircraft steps.

What is the history of the term ‘FBO’?

The term ‘Fixed Base Operator’ dates back to the days of unregulated civil aviation in the USA in the 1920’s.

Aircraft were relatively inexpensive in these post-war years, with a surplus of ex-military aircraft available. So transient pilots, known as ‘barnstormers’, began to offer passenger flights, aerobatic displays or airshows for the locals. They would travel all over the USA, landing in farmers’ fields at the edge of town, rather than at airports.

The transient nature of their jobs and lives meant that these aviators moved around with the aircraft and had no fixed business location.

Then in 1926 came the US Air Commerce Act. This enforced many new licensing for pilots; and the regulation of aircraft maintenance and training standards. Pilots and mechanics began establishing registered businesses, at a given fixed address. These were termed Fixed Base Operations or Operators – to distinguish them from the transient aviators of old.

Until relatively recently the term FBO was applied to the aircraft operator who was based at the airport (and in fact this is still the case at many smaller private jet airports). When a private flight wanted to land at an airfield which was not their home base, they would contact the Fixed Base Operator at the airport, in order to make the practical arrangements for the flight to land there. Initially this was all done in a non-commercial manner.

As the industry evolved and private jet flight movements became busier, the need arose to create third party organisations to manage facilities for customers and crew at busier airports – such as refueling, security, hangars, lounges and car parking.

The private jet industry has changed in many ways in the past few years, and the ownership of FBOs has been a particularly noticeable shift. In the 1990’s there were lots of smaller, independent companies running FBOs, now there is growing consolidation and this is likely to continue in the years ahead. Signature Flight Support is the biggest name, with over 200 locations worldwide.

But it’s not always a case of bigger means better. A successful FBO will develop its own identity or niche. Some look to compete on fuel pricing, others for exceptional VVIP services for royalty, heads of state or other high profile travellers.

So smaller brands are also seeing success in this competitive field. Sky Valet is one growing brand in Europe, originally a French company with an award-winning FBO at Cannes Mandelieu airport, they now have a growing number of FBOs across Europe.

They were the first FBO brand in Europe (and the third worldwide) to be awarded an IS-BAH (International Standard for Business Aircraft Handling) – a mark of best practice and safety for FBOs, that was introduced in 2016. Another early recipient was Inflite at London Stansted.

Airports serving major cities will often offer a number of rival FBOs in one location. Paris Le Bourget (Europe’s busiest private jet airport) has eight – more than any other airport in the world. London Luton Airport offers a choice of two, while Teterboro Airport in New York has five. 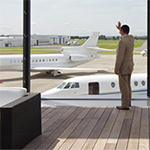