How does the jet stream affect my flight time?

The private jet cost between London and New York, or other transatlantic routes, can vary according to factors such as aircraft type. But flight time is another variable. Typically, an eastbound flight from the US to Europe is faster than flying in the other direction, due to the push factor of a jet stream.

It’s not uncommon for pilots – of both airline and private jet flights – to save a lots of time against schedule on a eastbound Atlantic flight, particularly in the winter and early spring.

What is a jet stream?

Jet streams are strong westerly winds that blow in a narrow band in the Earth’s upper atmosphere – at the altitudes used by most aircraft. Where these packets of fast moving air form a tube, they are called jet streams.

By flying in a jet stream, aircraft travelling from west to east get carried along by the tailwind, saving them time – and/or fuel. In fact most airline pilots are trained to reduce airspeed when the winds are so much to their advantage, to save fuel costs – not to fly in the shortest possible time. Private jet pilots nearly always fly as fast as possible but would of course speak to the customers on-board to ensure that an early arrival time is acceptable.

The North Atlantic jet stream typically reaches its peak intensity during January and February, when the temperature contrast between the equator and the North Pole is largest.

The intensity of the jet stream also has a big impact on the weather – generating polar vortex-related winter conditions.

Airspeed and ground speed are not the same thing though. An aircraft can be flying within normal design limits, well below the speed of sound at altitude, but according to its ground speed, appear to be flying at near-supersonic speeds.

What is ground speed?

Aircraft fly relative to the air around them. In the case of a tail wind the air around an aircraft is also moving, so the combination of the speed of the aircraft and air it is flying in results in a greater ground speed.

Of course a head wind will also reduce the ground speed of an aircraft. Flying in the a westerly direction across the Atlantic – Europe to US – can take significantly longer when the jet stream is at its peak and headwinds are bellowing from west to east across the ocean. Flights sometimes take an unusual route to avoid this – such as flying closer to Greenland, rather than heading due west across the Atlantic.

How are take off and landing affected by winds?

Aircraft always take-off and land into the wind to reduce the ground speed.

Cross winds can also make take off and landing challenging for pilots. So airports will impose limits if the wind is moving across the runway. Many airports have runways facing in different directions to mitigate against cross winds, allowing the pilots to use the runway that faces into the wind.

When it comes to speeding up your travel time, private jets make shorter work of any journey – regardless of the wind direction. Not only in actual flying time – although speed rivals the Gulfstream G650ER and Citation X are faster than commercial airliners – but on the ground. When you can arrive just minutes before take-off and use smaller airports closer to your destination, your journey will be faster, whatever the weather. 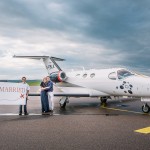 Our ten most memorable flights

Turning ten this month is a real milestone for all of us at PrivateFly. We’re looking back on ten years of passion and industry challenges; ten years of developing our bespoke technology; and ten years of building…
November 30, 2011

In his Autumn statement yesterday, the chancellor George Osborne announced that Air Passenger Duty on private jet flights would be introduced in April 2013. His statement read “The Government will proceed with the extension of…
BLOG HOME
Months
Categories