Celebrate New Year Twice In One Night? Sydney to LA in the world’s fastest private jet

If you can’t get enough of New Year’s Eve, how about celebrating it twice – in one night? If you fly in the world’s fastest private jet, you can do just that.

If you start in Sydney, you can first enjoy a full evening of celebrations and the stroke of midnight. Then – if you have the stamina and the budget – do the same all over again in Los Angeles.

Experiencing New Year’s Eve twice is only possible by moving eastwards across the International Date Line. With the time in Los Angeles 19 hours behind Sydney, you can visit both in the same evening – by minimising travel time and flying on a bespoke itinerary. This unique flight experience is only possible by private jet, as the timings are so tight – and there are no airline schedules to fit the itinerary.

This is the ultimate in luxury ways to see in 2015, in two of the world’s most exciting party cities. The flight time from Sydney to LA in a Gulfstream G650 is now just under 11 hours, so with the 19-hour time difference, you can gain eight hours of party time by flying eastwards.

With the world rotating at 1,038 miles per hour, no civilian aircraft can currently overtake time. But the Gulfstream G650 is the fastest way to play catch up currently. It’s the world’s fastest private jet, with a range of 7,000 nm and a top speed of Mach 0.925, just under the speed of sound. An extended range version, the G650ER was recently certified, which can fly up to 7500 nm non-stop. So it’s the ultimate long range jet for those looking to fly further and faster.

For an even faster journey, supersonic private jets such as the Aerion AS2 are currently at concept stage, and expected to be in operation by 2021. So that will allow even more extended hours of partying within the next few years. Until then, here’s our suggested itinerary for this New Year’s Eve:

Spend your evening in Sydney, celebrating at the city’s most exclusive party spots. You could join other VIP partygoers at the NYE Midnight Party – an exclusive party at the Sydney Opera House. Or for a more intimate celebration dinner, with a fabulous view of the fireworks, The Dining Room at the Park Hyatt Sydney has sweeping harbour views.

You can party until past 1:00am on New Year’s Day, as it’s just a short 12km drive from the harbour to Sydney Kingsford Smith airport, offering 24-hour access for private jets.

Your Gulfstream G650 long range jet will be waiting, ready for a 2:00am departure and can take off just minutes after you arrive at the airport. The G650 is the fastest private jet aircraft in the world – the long range party aircraft of choice, offering sleek interior configurations which accommodate 11 to 18 passengers.

During the 11-hour flight, dedicated partygoers can continue the celebrations VIP style with high-spec systems for music and video entertainment, fine wines, champagne and bespoke catering. Or if you’d rather recharge your party batteries in complete comfort during the flight, there’s the option of a double bed and bathroom with shower, with further fully-reclining seats in the spacious, luxury cabin.

While others are waking to a New Year and sore heads back in Sydney, the night is still young in LA. You’ll land early evening – refreshed and ready to start all over again – at Van Nuys, LA’s exclusive private jet airport.

Just a short drive away are the most exclusive nightspots of Beverley Hills. Cleopatra’s Ball attracts some of Hollywood’s hottest partygoers to the Egyptian Theater. Or dine at one of LA’s most exclusive restaurants, such as the Crustacean, renowned for its South East Asian cuisine and floor-to-ceiling aquarium. 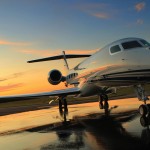 For New Year 2018 celebrate twice in Sydney & Honolulu New Year’s Eve parties can go all too fast. Before you know it, it’s all over and you’re waking up to the start of another…
BLOG HOME
Months
Categories